You can read more about this strategy at here.

At Town Hall 7 in Clash of Clans, people start joining Clan Wars more than at Town Hall 6 because of the sweet loot bonus. You can earn up to 300k Gold and Elixir for every win Clan War, that’s pretty sweet right? Sometimes, you can even earn hundreds DE, that’s much better and easier than farming outside in hours.

Dragons are the most powerful troop at Town Hall 7, especially the Dragon level 2, which can destroy any building with just 1-2 hit.

The number of buildings which can survive more than 3 hits of Dragons is very small. As far as I can remember, it’s no more than 4 buildings except the Storages. 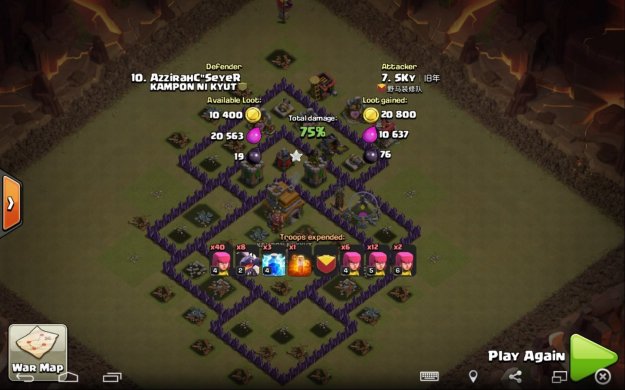 With that being sid, at Town Hall 7, If you want to use the Mass Dragon attack, especially after the new update (Town Hall 7 players can buy the third base Air Defense), I strongly recommend you guys get the Lighting Spell to its maxed level as soon as possible, brew 3 spells, bring them into the battle and destroy the hardest-to-take Air Defense, snipe the Air Sweeper or another Air Defense with your Hog Riders or Balloons in Clan Castle. Don’t use your own troops to finish this job. Balloons and Hog Riders with maxed level from your friends in Clan are much better.

After taking down the Air Defense, If you want to completely bully a th7 farming base, you should drag and drop your Dragons in a line. Don’t place then in just 1 spot. If they hit a trap horde, you will be fine. Also, you should know about funnel If you don’t want your Dragons go shopping around the enemy base and get hit badly by the enemy ADs and Air Sweeeper inside.

Also, don’t attack from the behind of the Air Sweeper If you don’t have the Rage Spell or If you don’t know that are you doing. The Air Sweeper can always push your Dragons back badly and sometimes you even can’t deal enough damage to a 50% win.
Take care guys! See ya!

Hello my friends, because I have been received lots of requests about the new TH7 Farming Base, today, I have decided to publish it on my blog.

It’s such a long time since the first time I saw a nice TH7 Farming Base. I hope you  guys will love my works and support me in the future! 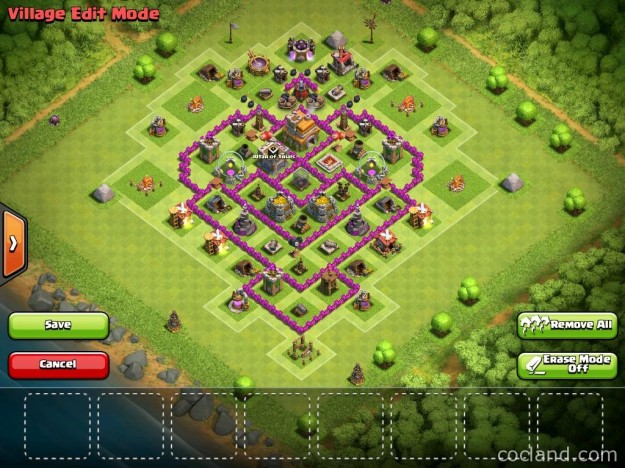 Looks pretty solid, right? And here is the speedbuild video of it. I hope you will like it:

Here are some recent features of this base. I will update more in the future and post them into this page as soon as possible:

What do you think about this Clash of Clans TH7 Farming Base? Do you like it? Please comment If you have any improvement for it. I will listen to you regardless!

Hello my friends. In the last post, I showed you how to attack with Dragons. It’s pretty easy, right? Today, I am going to show you how to attack with Hog Riders, a special troop that I think all players want to have before they go to Town Hall 7 because of the special ability of this troop: Jumping over the world.

At first, please take a look at the table below, which shows you everything about the Hog Rider in Clash of Clans. You can use them for either Clan Wars or attack another TH7 Farming Base:

You can buy them at Town Hall 7 and once you have the Laboratory level 5, you can upgrade them to level 2 immediately. Another small note here is that I strongly recommend players focus on upgrading Heroes (the Barbarian King at Town Hall 7) at first, before Minions or Hog Riders. Minions at Town Hall 7 is totally useless. They are really soft and you just can’t use them in most attack.

Although Hogs level 2 are still very weak but you can use them to destroy any mid-early Town Hall 7 Base, also, by using Hogs, you can practice and have much better Hog attacks in the future, especially at Town Hall 8 and Town Hall 9.

While using Hogs, you need to care about 3 things:

Because there isn’t any Double Giant Bomb  at TH7, which can kill your Hog Squad immediately, so you don’t need to care about this much. Just make sure that you have cleared every single Clan troops before start attacking because Hogs will never target those troops until they remove every single defensive buildings on the ground. If you don’t kill those Clan troops, they will hit your Hogs badly and ruin your battle anytime. It’s not good at all, right?

Okay, thank you guys very much for reading, I will tell you more about this in the future! Until the next time my friends!